The Sixteen Plus forum organized in Sierra Leone in October 2018 provided a unique opportunity for Sierra Leone to showcase progress made so far with regards its statebuilding and peacebuilding initiatives. It was also welcoming noting the unique opportunity provided to introduce relevant members of the new government on the global requirement of achieving the SDG’s especially the significance of SDG 16+. It further served as a challenge for Sierra Leone state and non-state actors to pursue a common purpose of achieving priority areas of the SDG, but more especially SDG16+ as it serves as the all-encompassing framework that creates the enabling environment for other goals to be achieved.

The deliberations were timely as it infused energy especially non state actors hearing experiences of other countries but most importantly Sierra Leone’s position within the global stage to achieve SDG16+. It triggered extensive discussions more especially with Sierra Leone serving as the co-chair of the International Dialogue on Peacebuilding and Statebuilding (IDPS), and chair of the g7+ group of Fragile and Conflict-affected countries opting to participate in the Voluntary National Review Process. 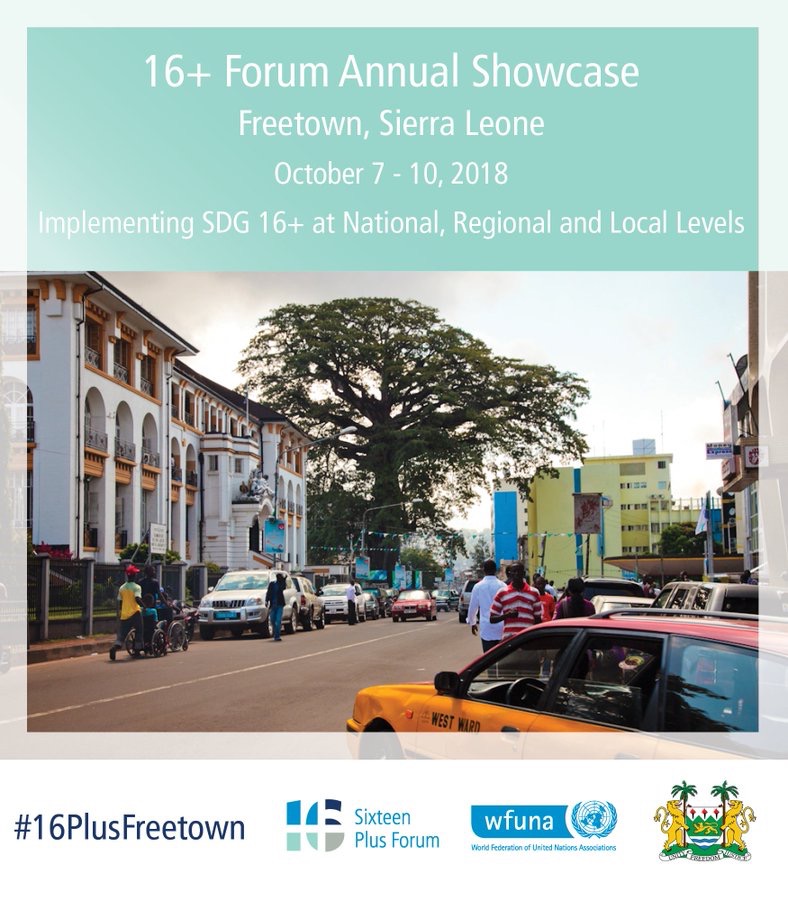 Creating a peaceful, just and inclusive society needs to serve as the mantra for Sierra Leone’s economic, political social, and cultural development. Our democratic consolidation becomes threatened by high level of political intolerance, winner takes all mindset and corruption. It was therefore important that political players, development partners and non-state actors have a continued dialogue around measures/ strategies that will address the increasing political divide through building bridges around those issues that bind us together as a nation, building peace and social cohesion.

Over the years party politics and political identify have overshadowed nationalism and patriotism. There is more allegiance to political parties than to the state. This breeds marginalization, encourages cronyism, patronage, sycophancy. It becomes a situation of ‘them against us’ with a good number of the citizenry holding a strong perception of being neglected and abandoned as a result of differences in political ideology. Our economic plans, justice system civil and public service are challenged with remaining professional and providing the required services to the public at the level of efficiency and standard required. The violence associated with our electoral processes raises fundamental questions on how successful democracy has been in protecting rights and freedoms, improving the economy and more importantly ensuring equitable distribution of resources through participation and inclusion through accountable systems and processes.

The current IDPS facilitated country dialogue process requires expansion to include sectors around the justice and security sector, the extractives, land rights, children’s rights (especially around labour in mining areas), promoting accountability and transparency in the public sector, women’s rights being the most critical governance issues.

Sierra Leone will serve as an ideal country to deepen the discussion around the 2030 Agenda and in particular around SDG16+ peaceful just and inclusive society. There was a change of government following the last presidential and parliamentary elections held in March 2018. The change occurred not to tick the box of a regime change to forestall state capture by their continued stay but largely due to perceptions of marginalization. Speaking to family members and friends after the elections a significant number claimed they had voted in the winning party based on depreciated trust levels in the previous government to deliver basic services and unify the country. The electoral process itself did not unify the country and social cohesion remains a gap in our peacebuilding engagements.

Social cohesion needs to be addressed from a holistic perspective; working at the community level through civil society organisations and the media, holding dialogue sessions/round table discussions with various sectors; religious bodies, the private sector, traditional leaders and political parties; state commitment involving all arms of state in the day to day delivery of their services. From the executive and legislature- the policies regulations and laws that will reflect the needs and aspirations of the diverse groups that will positively impact the wider society. The judiciary as another arm of state –administration and dispensation of justice and for the legislature; strengthening their oversight role through following up on recommendations of the Audit service and on government’s proposed laws and contract.

It goes further to capture communication from state officials to the rest of the population and minimizing the reference and association to political parties.  For a just, peaceful society and for the promotion of peaceful co- existence especially from a country that has experienced war there has to be a conscience effort on the part of policy makers to engage in a manner that promotes such environment.

Certainly, Sierra Leone needs to have another conversation especially around national cohesion. Civil society has a pivotal role to play and they have already started. With support from UNDP a number of CSO’s have conducted dialogue sessions with communities across the countries where the highest level of elections related violence occurred during the elections. What has emerged most significantly is the slow response from the justice sector particularly the police to address complaints received especially from women. Civil society therefore needs to strengthen its advocacy around enhancing accountability in the justice sector in order to build public trust and ensure an effective service delivery framework.

There is an opportunity with the design of the National development framework for CSO’s to build around these initiatives for the achievement specifically of SDG16+ as the precursor to achieving the other goals.