From Words to Actions: Implementing SDG16 in Fragile and Conflict Affected States

The adoption of 2030 Agenda proves that ‘there can be no sustainable development without peace and no peace without sustainable development'. Peace requires inclusivity, and this can be achieved through Goal 16, which commits countries ‘to promote peaceful, inclusive societies for sustainable development, to provide access to justice for all and to build effective, accountable and inclusive institutions at all levels'. However, there is need to ensure that concrete steps are taken towards the achievement of this Goal while holding Governments accountable.

Peace requires inclusivity, and this can be achieved through Goal 16.

Following the adoption of the 2030 Agenda, the Civil Society Platform for Peacebuilding and Statebuilding (CSPPS) partnered with UNDP in the context of the Global Alliance on Reporting Progress on Goal 16, giving prominence to the Platform agenda on this thematic i.e. sharing key lessons emanating from CSPPS engagement in context of the International Dialogue for Peacebuilding and Statebuilding (IDPS) and provision of support to CSPPS partners on issues related to Goal 16, SDGs and the overall 2030 Agenda for Sustainable Development. Next to this, the CSPPS has partnered with the World Federation of United Nations Associations (WFUNA) in discussions relating to SDG16+ Forum. This forum seeks to demonstrate SDG 16+ in policy and practice, as an output and enabler of the universal and interdependent 2030 Agenda, with links to Sustaining Peace and other relevant agendas, and through multi-stakeholder partnerships.

A month after co-organizing an event on ‘Making SDG16 Work for the Rule of Law and Access to Justice: Measuring Progress in Fragile and Conflict Affected States', the CSPPS has been invited to join the Inaugural Annual Showcase Peaceful, Just and Inclusive Societies – from words to action : implementing SDG 16 at the local and national level from 30 October to 1st November 2017 in Tbilisi, Georgia. The event will be attended by Peter van Sluijs, IDPS/CSO Coordinator & Cordaid Senior Strategist; Foday D.M. Sesay and Joao Boavida, CSPPS Country Team members in Sierra Leone and Timor Leste respectively. They will be joined by FriEnt and GPPAC (CSPPS northern member organisations). In advance of the meeting this week in Tbilisi, we have contacted our g7+ civil society colleagues from Timor Leste and Sierra Leone to speak about their expectations for the meeting.

Timor-Leste provides a fertile ground for SDG16 to take roots and flourish.  Although a young nation-state, the country has proved relatively peaceful and resilient since its restoration of independence in 2002, in spite of few major political crises due mostly to disputes over ownership of political narratives. In response to the 2006 crisis, the Centre of Studies for Peace and development (CEPAD), CSPPS member organization in Timor-Leste, was established to contribute to creating conditions enabling Timorese to identify the most pressing obstacles to lasting peace and development, and define ways and means to collectively address these in non-violent and sustainable ways, using Participatory Action Research; a unique approach. During the Inaugural Showcase, Joao expects participants, particularly donors and governments, to recognize and emphasize that if a government and its citizens are to equally enjoy the benefits of a true development in a society that is truly peaceful and just, the participation and inclusion of citizens and the transparency and accountability in governance processes must remain the key foundation on which the relationship between states and citizens are built and sustained.

It is Foday's hope that the Inaugural Showcase will come up with a resolution to establish Early Warning and Early Response Monitoring Desks in g7+ countries. This aspect would ensure promotion of conflict and violence prevention approach over issues bordering on the flesh and minds of citizens. He called for the setting up of Peace infrastructures in the country. Going forward, to actualize these dreams, Foday calls on the Government of Sierra Leone to provide a Policy framework for the development of a Road Map that will support and promote more robust implementation of Goal 16.  A Framework that will as well provide a levelled playing ground for all and sundry, in the spirit of inclusivity. He further urges the Government of Sierra Leone and parliament to ensure the ratification and domestication of agreements that will promote national/regional stability and effective border managements, be speedily done. Once this is done, citizens will fully embrace the process of awarding symbols, and shall eventually own the process involved in SDG16 implementation. Finally, Government and the citizenry to ensure full respect and the upholding of human rights and democratic standards and promote the rule of law and its enforcement/implementation, climaxed with the consolidation of peace.

In addition to peer support, we provide our members with a collective lobbying and advocacy platform.
Read more 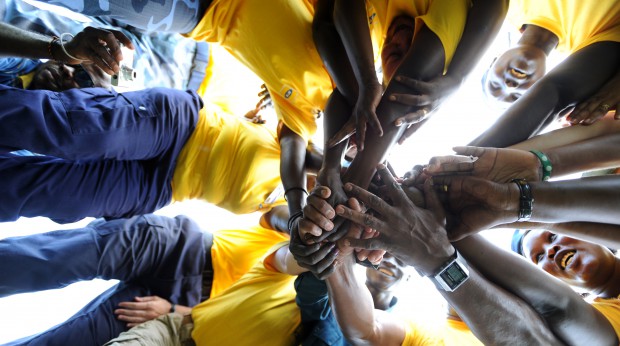